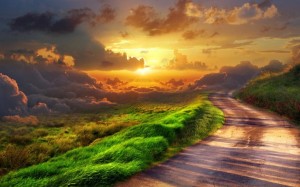 And this is the Gospel of the Lord. Praise to You Lord, Jesus Christ.

St. John tells us a simple story but full of heavenly conclusions. Philip brings his friend Nathanael to see Jesus. Jesus gives a simple comment which brings a deep dialog about heaven and a heavenly relationship.

Jesus reveals to Nathanael a revelation of how God looks at each one of us in the very depths of our hearts. He also invites us into intimate communion with Him in His heavenly court.

Let’s focus on Jesus’ saying to Nathanael, “Before Philip called you, I saw you under the fig tree.” What is the meaning of this word? As we know it well, for the people of Israel, the fig tree is a symbol of God’s peace and blessing. It provides shade from the midday sun and a cool refreshing place to retreat, pray, and reflect on God’s word. Rabbis of Jews often gather their disciples under the shade of the fig to teach them the wisdom and revelation of God from the Scriptures. They have an expression for comparing the fig tree to being nourished with God’s word in Scripture, “He who tends the fig tree will eat its fruit.”

So, when Jesus says to Nathanael that He sees him under the fig tree, He wants to
offer him peace and friendship with God as the greatest gift. For Nathanael, the saying of Jesus is very clear. He has been thinking of God “under his fig tree” and reflecting on God’s promise in the Scriptures to send a Messiah King who will free His people from sin and give peace for the world. It’s why he says to Jesus in reply, “Rabbi, you are the Son of God; you are the King of Israel.” Nathanael recognizes well that Jesus is truly the Messiah, the everlasting “Son of God and King of Israel” (John 1:49). Then Jesus offers to Nathanael the greatest and amazing grace namely friendship with God and free access to God’s throne in heaven because he will see heaven opened, and the angels of God ascending and descending upon the Son of man.

In Perpetual Adoration of the Eucharist we learn from Nathanael to grow in faith to Jesus, the Son of God. We worship Jesus as the Messiah who unites earth with heaven and opens the way for us to ascend to heaven and brings heaven to earth in our daily lives.