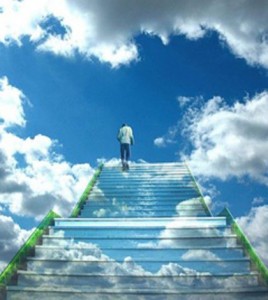 Then he said to his disciples, “The days will come when you will long to see one of the days of the Son of Man, but you will not see it. There will be those who will say to you, ‘Look, there he is,’ or ‘Look, here he is.’ Do not go off, do not run in pursuit. For just as lightning flashes and lights up the sky from one side to the other, so will the Son of Man be in his day. But first he must suffer greatly and be rejected by this generation.”

This is the Gospel of the Lord. Praise to Lord Jesus Christ.

Jesus says, “For behold, the Kingdom of God is among you. For just as lightning flashes and lights up the sky from one side to the other, so will the Son of Man be in his day. But first he must suffer greatly and be rejected by this generation.”

Jesus speaks of the coming of God’s Kingdom as a present event not only an event which will be manifested at the end of time. The Kingdom of God is among us.

He then associates lightning with the coming of the Kingdom of God. Jesus warns the Pharisees – and also all of us – that the Son of man will come in like flaming light, quite suddenly and unexpectedly, on the clouds of heaven to bring God’s judgment on the Day of the Lord. No special sign will be needed to announce His appearance. We will recognize Him as clearly as the lightning in the sky.

Jesus surprises the Jews of His time by announcing that God’s Kingdom is already present among them in His very person as the Son of God sent from the Father to redeem the world from sin and corruption. It means that the Kingdom of God is also among us today. Our hope is anchored in God’s Kingdom as well.

Jesus teaches us that the victory of His Kingdom is through the cross. So He says, “But first he must suffer greatly and be rejected by this generation.”

In Perpetual Adoration of the Eucharist, we worship Jesus who is among us. We adore Jesus who defeats death and cancels the debt of our sin on the cross. There, we are as sons and daughters of God and citizens of His heavenly Kingdom of God praise Him.

Let’s pray: Lord Jesus Christ, may Your Kingdom come and Your will be done on earth as it is in heaven. May we realize that in You we live in the Kingdom of God and always live in the freedom of your love and truth, now and forever. Amen.