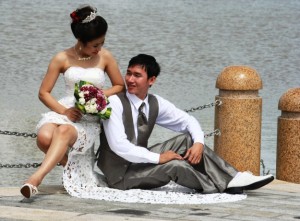 “So that they are no more two, but one flesh. What therefore God hath joined together, let not man put asunder.”  (Matthew 19:6)

THIS  quotation shows the teaching of Jesus on the sanctity and indissolubility of marriage. “They are no more two, but one flesh. What therefore God hath joined together, let not man put asunder” (Matthew 19:6).

As we know it well, in the Catholic Church, marriage is more than a natural institution. It’s elevated by Jesus Christ, to be one of the seven sacraments. A marriage between two baptized Christians has a supernatural and therefore a
sacramental element. So, marraige between any two baptized Christians, as long as it is entered into which the intention to contract a true marriage, is a sacrament.

When the sacrament of marriage has been received by a man and a woman and ratified by their cohabitation as husband and wife, their union cannot be dissolved except by death. The Catholic Church teaches us, “God is love and who created man and woman for love has called them to love. Bya creating man and woman He called them to an intimate communion of life and of love in marriage. “So that they are no longer two, but one flesh” (Matthew 19:6)” (Compendium of the Catechism of the Catholic Church/CCCC 337).

“So that they are no more two, but one flesh. What therefore God hath joined together, let not man put asunder” (Matthew 19:6). This is one of a biblical reason for understanding the Catholic teaching on the Sacrament of Marriage or Matrimony.

Based on this word, the Catholic Church says, “The Sacrament of Matrimony establishes a perpetual and exclusive bond between the spouses. God Himself seals the consent of the spouses. Therefore, a marriage which is ratified and consummated between baptized person can never be dissolved. Furthermore, this sacrament bestows upon the spouses the grace neccessary to attain holiness in their married life and to accept responsibly the gift of children and provide for their education” (CCCC 346).

There is something interesting between Perpetual Adoration of the Eucharist and the Sacrament of Marriage. Some people witness that by doing Perpetual Adoration of the Eucharist, troubled spouses can be reconcilled. By spending time before our Lord Jesus Christ in the Blessed Sacrament, some spouses can be saved from their marriage which is in danger for being dissolved. Even,

Let’s pray: Lord Jesus Christ, bless so many spouses You unites them in the Sacrament of Marriage. Bless spouses whose marriage is in trouble. Make them compatible again and bring then closer together. Fill them with Your lobve and give them the strength to love one another, care for one another, and fulfil Your destiny for them. Heal the division between them and make then one again, now and forever. Amen.