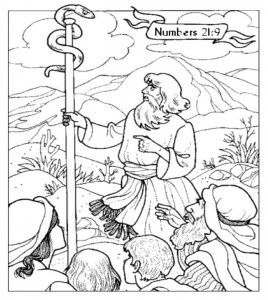 MY daily reflection and prayer: Sunday, March 15, 2015 The Fourth Sunday of Lent “Laetare Sunday: Rejoice, O Jerusalem” Dear my friends, Here is the Gospel for us today according to St. John 3:14-21 And as Moses lifted up the serpent in the wilderness, so must the Son of man be lifted up, that whoever believes in him may have eternal life.” For God so loved the world that he gave his only Son, that whoever believes in him should not perish but have eternal life. For God sent the Son into the world, not to condemn the world, but that the world might be saved through him. He who believes in him is not condemned; he who does not believe is condemned already, because he has not believed in the name of the only Son of God. And this is the judgment, that the light has come into the world, and men loved darkness rather than light, because their deeds were evil. For every one who does evil hates the light, and does not come to the light, lest his deeds should be exposed. But he who does what is true comes to the light, that it may be clearly seen that his deeds have been wrought in God. This is the Gospel of the Lord. Praise to you Lord Jesus Christ. *** The fourth Sunday in Lent is known as “Laetare Sunday”. Laetare is a Latin language means rejoice. It is quoted from Isaiah 66:10-11, “Rejoice, O Jerusalem”. The Gospel today records that Jesus explains to Nicodemus that the “Son of Man” must be “lifted up” to bring the power and authority of God’s kingdom to bear on the earth. Jesus explains to Nicodemus that he will be recognized as the Anointed King when he is “lifted up” on the cross at Calvary. Jesus died for his claim to be the only begotten Son sent by the Father in heaven to redeem, heal, and reconcile his people with God. He is the only Son of Man for us. When Jesus spoke to Nicodemus he prophesied that his death on the cross would bring healing and forgiveness and a “new birth in the Spirit” (John 3:3) and eternal life (John 3:15). Through and in Christ’s cross, God’s compassion is always available towards those who want turn away from sin and return to God with repentant hearts, trust, and obedience. This is the healing power of Christ’s redeeming love and victory which he won for us on the cross. Scripture tells us that on the road to the Promise Land, many people died in the wilderness because of their sin of rebellion towards Moses and God. God showed his mercy to them and instructed Moses to “make a fiery serpent, and set it on a pole; and every one who is bitten, when he sees it, shall live”(Numbers 21:8). This miraculous sign was meant to foreshadow and point to the saving work which Jesus would perform to bring healing and salvation to the world on the cross. Cyril of Alexandria (376-444 AD), an early church father, comments and explains the spiritual meaning of the bronze serpent and how it points to the saving work of Jesus Christ. This is his comment, “The serpent signifies bitter and deadly sin, which was devouring the whole race on the earth… biting the Soul of man and infusing it with the venom of wickedness. And there is no way that we could have escaped being conquered by it, except by the relief that comes only from heaven. The Word of God then was made in the likeness of sinful flesh, ‘that he might condemn sin in the flesh’ [Romans 8:3], as it is written. In this way, he becomes the Giver of unending salvation to those who comprehend the divine doctrines and gaze on him with steadfast faith. But the serpent, being fixed upon a lofty base, signifies that Christ was clearly manifested by his passion on the cross, so that none could fail to see him.” So, it’s clear now the relation between the bronze serpent of Moses and the cross of Jesus Christ. The bronze serpent which Moses lifted up in the wilderness points to the cross of Christ which defeats sin and death and grants everlasting life for those who believe in Jesus Christ. The result of Jesus “being lifted up on the cross” and his rising from the dead, and his exaltation and ascension to the Father’s right hand in heaven, is our “new birth in the Spirit”. We are, then in Jesus Christ, to be called the sons and daughters of God. God not only frees us from our sins and pardons us, he also fills us with his own divine life through the gift and working of his Spirit who dwells within us. The Christ’s cross is the proof of God’s love for us. God truly loves us and wants us to be united with him forever. For God so loved the world that he gave his only Son, that whoever believes in him should not perish but have eternal life (John 3:16). God proved his love for us by giving us the best he had to offer. He is his only begotten Son who freely gave himself as an offering to God for our sake and as the atoning sacrifice for our sin and the sin of the world. In Perpetual Adoration of the Eucharist, we worship Jesus Christ as the proof of God’s love for us all. What we love shows what we prefer. Let’s love God above all else and give him first place in our lives. Let’s pray: Lord Jesus Christ, your death brought life for us. May your love consume and transform our lives that we may desire you above all else now and forever.