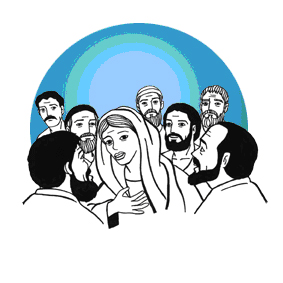 MY daily reflection and prayer: Wednesday, June 03, 2015 9th Ordinary Week Time Dear my friends, Here is the Gospel for us today according to St Mark 12:18-27 And Sadducees came to him, who say that there is no resurrection; and they asked him a question, saying, “Teacher, Moses wrote for us that if a man’s brother dies and leaves a wife, but leaves no child, the man must take the wife, and raise up  children for his brother. There were seven brothers; the first took a wife, and when he died left no children; and the second took her, and died, leaving no children; and the third likewise; and the seven left no children. Last of all the woman also died. In the resurrection whose wife will she be? For the seven had her as wife.” Jesus said to them, “Is not this why you are wrong, that you know neither the scriptures nor the power of God? For when they rise from the dead, they neither marry nor are given in marriage, but are like angels in heaven. And as for the dead being raised, have you not read in the book of Moses, in the passage about the bush, how God said to him, `I am the God of Abraham, and the God of Isaac, and the God of Jacob’? He is not God of the dead, but of the living; you are quite wrong.” This is the Gospel of the Lord. Praise to you Lord Jesus Christ. *** The Gospel today records about the Sadducees and Jesus. The Sadducees did not believe  both in the resurrection and the existence of immortal beings. Their religion was literally grounded in an earthly image of heaven which ended in death. They came to Jesus with a test question to make the resurrection look ridiculous according to their minds. They didn’t recognize spiritual realities because they tried to make heaven into an earthly image they could touch and see. God called himself the God of Abraham, the God of Isaac, and the God of Jacob (Exodus 3:6). God was the friend of Abraham, Isaac, and Jacob when they lived on the earth. That friendship with God could not cease with death. In the Perpetual Adoration of the Eucharist we worship Jesus Christ who shows us that God is a living God of a living people. His loving friendship never ceased. It’s perpetual and forever. Let’s pray: Lord Jesus Christ may we open our eyes to trust that God is the living God for us. May we gaze on God in the Spirit, through You o Lord, Jesus Christ now and forever. Amen. Kredit foto: Ilustrasi (Ist)