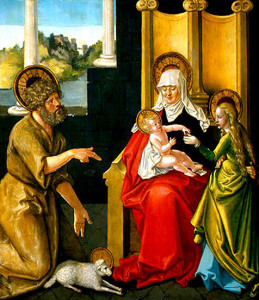 Now the time came for Elizabeth to be delivered, and she gave birth to a son. And her neighbors and kinsfolk heard that the Lord had shown great mercy to her, and they rejoiced with her. And on the eighth day they came to circumcise the child; and they would have named him Zechariah after his father, but his mother said, “Not so; he shall be called John.” And they said to her, “None of your kindred is called by this name.” And they made signs to his father, inquiring what he would have him called. And he asked for a writing tablet, and wrote, “His name is John.” And they all marveled. And immediately his mouth was opened and his tongue loosed, and he spoke, blessing God. And fear came on all their neighbors. And all these things were talked about through all the hill country of Judea; and all who heard them laid them up in their hearts, saying, “What then will this child be?” For the hand of the Lord was with him. And the child grew and became strong in spirit, and he was in the wilderness till the day of his manifestation to Israel.

This is the Gospel of the Lorc. Praise to you Lord Jesus Christ.

Today is the birthday of St. John the Baptist. His birthday and even his name was announced by Angel Gabriel to Zechariah, his father (Luke 1:17). His mother, Elizabeth, was firm in her faith. She was determined to see that God be glorified through their child.

In the birth of John the Baptis we see the grace of God breaking forth into a world broken by sin and without hope. The name John means “the Lord is gracious”. His  miraculous birth shows the mercy of God in preparing his people for the coming of Jesus Christ, the Lord and Savior.

John the Baptist was filled with the Holy Spirit even from his mother’s womb (Luke 1:15, 41). The Holy Spirit dwelt in him and made him the forerunner of the coming Messiah. He was led by the Holy Spirit into the wilderness prior to his ministry. There, he was tested and grew in the word of God. He guided people to recognize and receive Jesus Christ when he came.

In the Perpetual Adoration of the Eucharist, we worship Jesus Christ about whom John the Baptist had introduced to be recognized. Jesus Christ also invites each of us to make our life a free-will offering to God. He wants to fill us with his Holy Spirit all the days of our lives, from the womb, birth, through death.

Let’s pray: Lord Jesus, we give you thanks for your mercy. Let your grace renew the offering of our lives to God. Let your Holy Spirit renew and restore us all in the hope and joy of your salvation now and forever. Amen.