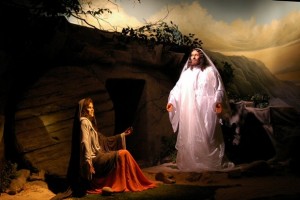 MY daily reflection and prayer:
Tuesday, April 7, 2015
Tuesday in the Octave of Easter

Here is the Gospel for us today according to

But Mary stood weeping outside the tomb, and as she wept she stooped to look into the tomb; and she saw two angels in white, sitting where the body of Jesus had laid, one at the head and one at the feet. They said to her, “Woman, why are you weeping?” She said to them, “Because they have taken away my Lord, and I do not know where they have laid him.”

Saying this, she turned round and saw Jesus standing, but she did not know that it was Jesus. Jesus said to her, “Woman, why are you weeping? Whom do you seek?” Supposing him to be the gardener, she said to him, “Sir, if you have carried him away, tell me where you have laid him, and I will take him away.” Jesus said to her, “Mary.”

She turned and said to him in Hebrew, “Rabboni!” (which means Teacher). Jesus said to her, “Do not hold me, for I have not yet ascended to the Father; but go to my brethren and say to them, I am ascending to my Father and your Father, to my God and your God.” Mary Magdalene went and said to the disciples, “I have seen the Lord”; and she told them that he had said these things to her.

At the tomb of Jesus, Mary Magdalene saw the risen Jesus Christ but she did not know that it was Jesus. Even, she supposed him the gardener the she said to him, “Sir, if you have carried him away, tell me where you have laid him, and I will take him away.”

Why did she not at first recognize Jesus? It happened because her focus was on the empty tomb and on her own grief. Just after he called her by name, Mary then recognized him. Mary Magdalene went and said to the disciples, “I have seen the Lord” for Jesus sent her to tell that Jesus was risen to his disciples.

Mary’s message to the disciples, that she has seen the Lord, is the very essence of Christianity. It is not enough that a Christian know about Jesus Christ, the Lord. We must know him personally. To be a Christian is to encounter Jesus Christ, the living Lord who loves us personally and shares his glory with us. Jesus Christ gives us eyes of faith to see the truth of his resurrection and victory over sin and death (Ephesians 1:18).

Let’s pray: Lord Jesus Christ, may we never fail to recognize your voice nor lose sight of your presence in your life-giving heavenly bread in the Blessed Sacrament now and forever. Amen. 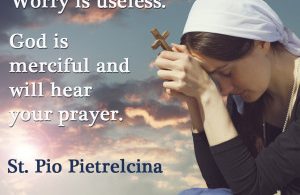 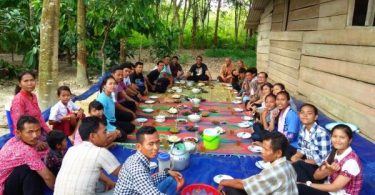