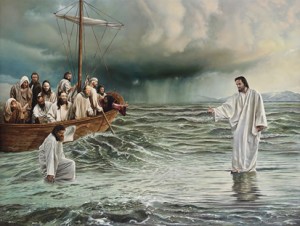 MY daily reflection and prayer:
Friday, March 27, 2015
The Fifth Week of Lent

Dear my friends,
Here is the Gospel for us today according to John 10:31-42

The Jews took up stones again to stone him. Jesus answered them, “I have shown you many good works from the Father; for which of these do you stone me?” The Jews answered him, “It is not for a good work that we stone you but for blasphemy; because you, being a man, make yourself God.”

Jesus answered them, “Is it not written in your law, `I said, you are gods’? If he called them gods to whom the word of God came (and Scripture cannot be broken), do you say of him whom the Father consecrated and sent into the world, `You are blaspheming,’ because I said, `I am the Son of God’? If I am not doing the works of my Father, then do not believe me; but if I do them, even though you do not believe me, believe the works, that you may know and understand that the Father is in me and I am in the Father.”

Again they tried to arrest him, but he escaped from their hands. He went away again across the Jordan to the place where John at first baptized, and there he remained. And many came to him; and they said, “John did no sign, but everything that John said about this man was true.” And many believed in him there.

The Gospel today records that the religious leaders of the Jews so upset with Jesus that they wanted to kill him. Jesus claimed to be the Son of God and he made himself equal with God. So they charged him with blasphemy.

According to the Law of Moses it was a crime and the Law of Moses laid down the death penalty for such a crime. In the Leviticus written, “He who blasphemes the name of the LORD shall be put to death; all the congregation shall stone him” (Leviticus 24:16).

However, Jesus defended his right to call himself the Son of God and that it was not a blasphemy. He quoted from the Scripture, which cannot be broken, especially Psalm 82:6, “I say, “You are gods, sons of the Most High, all of you”. Jesus argued that if Scripture can speak like that of humans, why should he not speak of himself like that?

Jesus then explained that he was consecrated by the Father for a special task. He was sent into the world to carry out his Father’s mission (John 10:36). All good works that Jesus did, such as healing the sick, raising the dead, and feeding the hungry, demonstrated that his power and marvelous deeds obviously came from God.

In Perpetual Adoration of the Eucharist, we worship lovingly Jesus Christ who brought this mission of salvation and made himself a sin offering for us, to ransom us from condemnation and slavery to sin. There he shows us the way to walk the path of truth and holiness.

Let’s pray: Lord Jesus Christ, anoint us with your power to live the gospel with joy and to be your witnesses in the world. Make us doer of your word, and not forgetful hearer only now and forever. Amen.