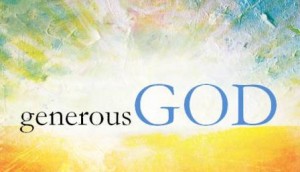 MY daily reflection and prayer:
Friday, April 17, 2015: The Second Week of Easter

Dear my friends,
Here is the Gospel for us today according to John 6:1-15

After this Jesus went to the other side of the Sea of Galilee, which is the Sea of Tiberias. And a multitude followed him, because they saw the signs which he did on those who were diseased. Jesus went up on the mountain, and there sat down with his disciples.

Now the Passover, the feast of the Jews, was at hand. Lifting up his eyes, then, and seeing that a multitude was coming to him, Jesus said to Philip, “How are we to buy bread, so that these people may eat?” This he said to test him, for he himself knew what he would do.

Philip answered him, “Two hundred denarii would not buy enough bread for each of them to get a little.” One of his disciples, Andrew, Simon Peter’s brother, said to him, “There is a lad here who has five barley loaves and two fish; but what are they among so many?”

Jesus said, “Make the people sit down.” Now there was much grass in the place; so the men sat down, in number about five thousand. Jesus then took the loaves, and when he had given thanks, he distributed them to those who were seated; so also the fish, as much as  they wanted. And when they had eaten their fill, he told his disciples, “Gather up the fragments left over, that nothing may be lost.”

So they gathered them up and filled twelve baskets with fragments from the five barley loaves, left by those who had eaten. When the people saw the sign which he had done, they said, “This is indeed the prophet who is to come into the world!” Perceiving then that they were about to come and take him by force to make him king, Jesus withdrew again to the mountain by himself.

The Gospel today tells us the miraculous sign of Jesus: the miraculous sign of the multiplication of the loaves. A great multitude had gathered to hear Jesus. They followed him because they were hungry for the word of life. Jesus not only gave them his spiritual words but also fed them with loaves which satisfied their hunger.

Jesus did the miraculous of the multiplication of the five loaves and two fish to feed at least the five thousand people who followed him. When his disciples wanted to send them away at the end of the day because they did not have the resources to feed them, Jesus revealed his loving power. He took five loaves and two fish and gave thanks to his heavenly Father, then distributed to all until they were satisfied of their hunger.

Surely, the feeding of the five thousand shows the remarkable generosity of Jesus as the Son of God and his great kindness towards us. He gives abundantly. He takes the little we have and multiplies it for the good of others. What can we learn from this event?

In the context of the Perpetual Adoration of the Eucharist, no doubt, Jesus has revealed that he is the true bread of heaven that can satisfy the deepest hunger we experience. Of course, the sign of the multiplication of the loaves when Jesus says the blessing, breaks, and distributes through his disciples prefigures the superabundance of the unique bread of his Eucharist. It’s not only satisfied our physical hunger but also spiritual one. The Eucharist is supernatural food which heals us for both our bodies and souls and strength for our journey heavenward.

Let’s pray: Lord Jesus Christ, in the Eucharist, you satisfy the deepest longing of our heart and you feed us with the finest of wheat. When we approach your Table, please, heal, pardon, and comfort our souls. May the Eucharist and Perpetual Adoration strengthen us in charity and enable us to freely share with others what you have given to us now and forever. Amen