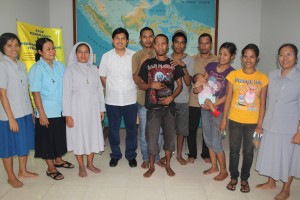 THE goal of pastoral care for migrants is to “provide concrete training” to prospective migrants, so that they can compete “in the labour market.” Economic crisis and unemployment feed trafficking. The Church works with the Ministry of Social Affairs in helping desperate people, including refugees.

Jakarta (AsiaNews) – “Our main goal is not only to fight human trafficking, but also to provide practical training to prospective migrant workers, so that they can compete in the labour market,” said Fr Petrus Christian Siswantoko, executive secretary of the Commission for Justice and Peace and the Pastoral Care of Migrants, an agency of the Catholic Bishops’ Conference of Indonesia (Konferensi Waligereja Indonesia, KWI).

Fr Siswantoko spoke to AsiaNews about the Church’s work in Indonesia against modern forms of slavery, ahead of the first International Day of prayer and reflection against human trafficking, which the Church will celebrate next Sunday, 8 February.

The clergyman plays a leading role in the fight against trafficking and exploitation of migrant workers, an area the local Church neglected for a long time, but which has taken centre-stage in recent years, and mobilised bishops, priests, nuns and lay people across the country.

The Church has focused its attention on the poorest and most marginalized people in Indonesia’s remote areas, people who are as much victims of human trafficking as of legal migration, whose promoters are often unscrupulous and unconcerned about human rights. Hence, KWI set up the Commission for Justice and Peace and the Pastoral Care of Migrants in 2004.

“In times of economic crisis” and unemployment, these modern forms of slavery tend to increase. Unfortunately, in these areas, jobs opportunity are scarce,” said Fr Siswantoko.

For the clergyman, one place where this can be found is East Nusa Tenggara (NTT), a province with a large Catholic population in the world’s most populous Muslim nation. Here, both legal and illegal labour practices, like trafficking, involve mostly people aged 14 to 30.

The Indonesian Ministry of Social Affairs often turns to the Catholic Church to help desperate people, including refugees, including Indonesians who are often repatriated from neighbouring countries because they lack proper residency papers.

In recent years, the Indonesian Bishops’ Conference has promoted pastoral activities to help such people “without hope”, through the valuable work of the Sisters of four religious orders who play a leading role in assisting the victims of human trafficking.

Among the many stories, the priest remembers that of “Miss X” – whose name he withheld to protect her privacy – who was “forced to stop her studies because of her family hard economic situation.”

An unscrupulous trafficker brought her to Malaysia where she worked as a housemaid. “However, one day, she was stopped by police because she lacked the proper work permit,” noted the priest, and her employer “refused to vouch for her.”

People are often repatriated without consideration for their human rights. “There are hundreds of cases like that of Miss X,” Fr Siswantoko said, “deported by force from countries overseas.”

In view of the situation, bishops, priests and nuns have undertaken various outreach initiatives in the past few years in order to protect the victims, including counselling sessions in which the latter can speak about their experience and critically understand the phenomenon of trafficking.

Women are often used (if not exploited) as domestic servants, in shopping malls, factories or – in the worst cases – in nightclubs. Hence, prevention is important. However, for Fr Siswantoko, only a few dioceses in the country have shown so far any interest in the issue and dedicated themselves to bringing the Church’s contribution to people without hope.

They include places like Pangkal Pinang, in the diocese of Sumatra, a “model” of commitment to the victims of trafficking, according to KWI’s executive secretary. The same goes for “Batam Island,” which “is close to Singapore,” and is thus “a strategic point of transit for Indonesian migrant workers.”

However, for Fr Siswantoko, Indonesians should learn from the Diocese of Sarawak-Sabah in Malaysia, whose commitment to the pastoral care for migrants stands as an example to follow.