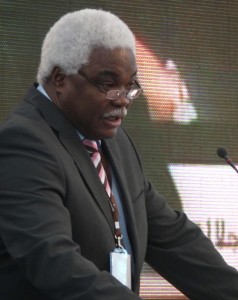 TODAY, the world becomes more urban than ever. More and more people leave to make their life in cities. African countries, said UCLG AFRICA’s Secretary General Mr.  Jean Pierre Elong Mbassi, is also experiencing this phenomena and that’s why, “More attention is needed from any local government in how to deal with the growing movement of people from villages to cities.”

This statement was said by Mr. Mbassi when he met Ms. Atik Kumala, UCLG ASPAC’s Strategic Services Manager from Jakarta in the 1st Retreat for UCLG Secretariats, Committees, and Key Partners in Barcelona, Spain this mid February 2015.

A new ‘world’ should be reinvented, Mr. Mbassi added, when local governments and cities can work together to make their social surrounding more human and adaptable for the urbanized people.

Speaking to Atik, he said that Barcelona’s initiative to invite all secretariats, committees and key partners to work together under the UCLG’s 1st retreat is something very significant to do. “I’m very happy to be around here with others from different Sections of UCLG to discuss matters related our common concerns and goals,” he concluded.

Asked on what issues that each Section could work together to enhance cooperation and coordination among members of the UCLG, Mr. Mbassy explained that UCLG is the only ‘hub’ where each member could share about their concerns and works. “This is the right time that we should exchange knowledge, ideas and synergy,” he said.

According to him, coordination and working together is vital for all members of the organization. More encounters should be made to facilitate cooperation among members. “Consolidation among members is an urgency as we are expected to know each other better to consolidate things,” Mr. Mbassy told Atik.